Valeo FC U13 Academy Is Heading To Spain 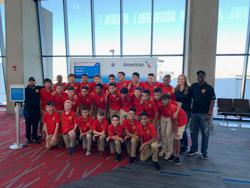 Valeo F.C. is heading to The Mediterranean International Cup in Spain. For more than 15 years The Mediterranean International Cup has been one of the world’s top youth soccer tournaments. Here, players and parents will experience top competition and cultural experiences in one of Europe’s most spectacular coastal regions – the Costa Brava. Located only 70 miles away from Barcelona.

WIth the support of popular soccer personalities like Pep Guardiola, Ronaldo, Ronaldinho and past participants including Leo Messi, (FC Barcelona), Cesc Fàbregas (Arsenal FC), Lucas (Liverpool FC), and Marcelo (Real Madrid CF), the MIC Cup has both history and reputation.

This April, more than 250 teams will be competing and the Valeo U13 Academy team made the cut! Led by Corlton Simmond & Luis Fernando Venta Yeps, the team will start training to compete with the best of the best. Through November of 2019, the talented team has posted a record of 7-3-2 against some pretty stiff, state-side competition. The new season kicks off March 1st where the boys will play six games across New England before they travel abroad.

Valeo FC remains a players-first club that believes it has a responsibility to provide players the best in training, competition and opportunities that builds character and delivers powerful on and off the field experiences.